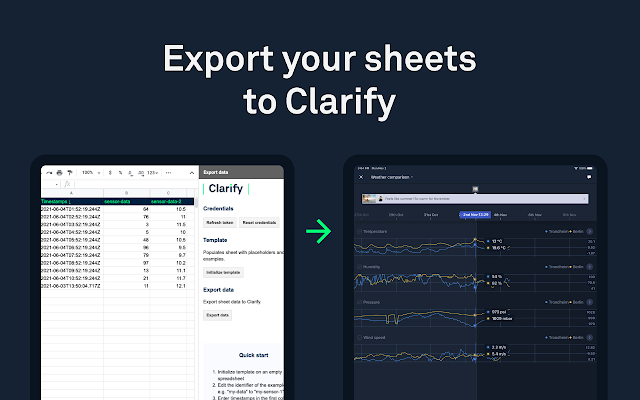 Clarify makes it easy to visualize, explore, and share knowledge around time-series data.

Clarify simplifies the access to data for everyone with an intuitive, engaging interface and rich collaboration capabilities that allow teams to add context and share knowledge about the data in real time.

Here’s how Clarify helps users to explore and organize their data:

Additionally, Clarify has the following data sharing and collaboration capabilities:

Google Sheets is a free, web-based spreadsheet application by Google, compatible with Microsoft Excel file formats. It allows users to create and edit spreadsheet files online, and to collaborate on the same file with others in real time. All the changes are tracked and saved in a revision history.

Google Sheets is available on multiple platforms: as a browser web application, as a desktop app on Google's Chrome OS, and as a mobile app for Android, iOS, and BlackBerry.

Google Sheets was launched in 2006. This product has originated from XL2Web, a web-based spreadsheet tool developed by 2Web Technologies. In 2006, following the acquisition of 2Web Technologies, Google renamed it as Google Labs Spreadsheets and launched the tool in a testing mode, available for a limited number of users at the time.

In 2010, after Google acquired DocVerse, a developer of online document collaboration solutions that allowed multiple users to collaborate on files in Excel-compatible documents (as well as other Microsoft Office formats), its features were integrated into Google Spreadsheets.

Another piece of technology that became a part of Google Spreadsheets was Quickoffice, a freeware proprietary productivity suite for mobile devices, acquired by Google in 2012.

In 2012, Google renamed the product from Google Spreadsheets to Google Sheets and made it part of its Google Docs Editors suite.

Google Sheets add-on by Clarify is available for free on Google Workspace Marketplace. After installing the add-on, just open a new or existing file in Google Sheets and go to the Add-on menu, where you should find the Clarify add-on icon.

The Google Sheets add-on by Clarify can be used in multiple scenarios. Here are some examples of how you can utilize this tool:

The Clarify add-on makes it easy to combine data from several columns in a spreadsheet, performing calculations or statistical operations and sending the results to Clarify for visualization and analysis. 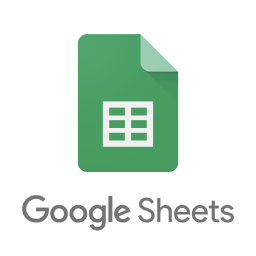