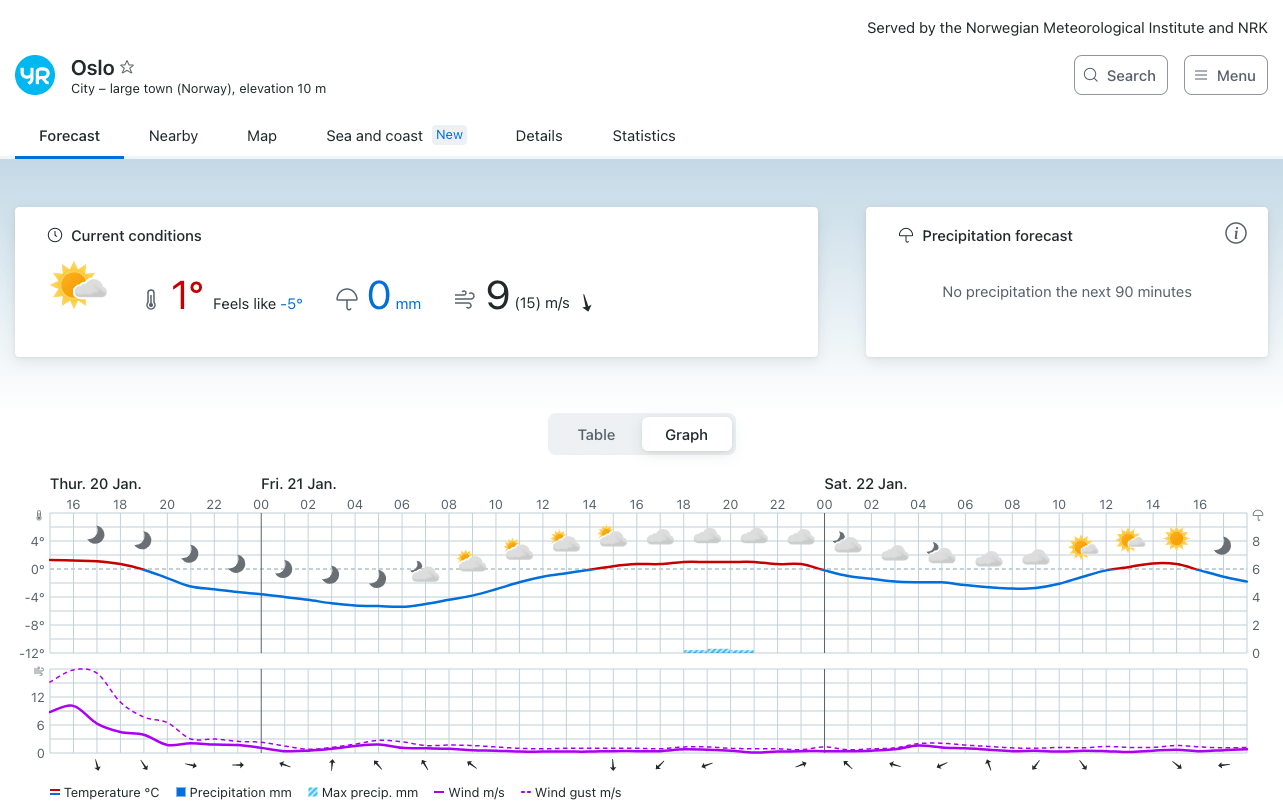 The Norwegian Meteorological Institute (MET Norway) forecasts weather, monitors the climate and conducts research. All the datasets created by MET Norway and containing data related to weather, sea and climate, are publicly available through the Yr website, as well as MET Norway Weather API, which covers weather data across the entire globe.

Thanks to our flexible input APIs, weather forecasts and other information from MET Norway can be easily integrated into Clarify, providing a cost-efficient and simple way of getting value from this data.

Based in Oslo, the Norwegian Meteorological Institute has additional offices in Tromsø and Bergen. It employs over 500 staff members and around 650 part-time observers around the country. The institution provides public meteorological services for both civilian and military applications and conducts research in meteorology, oceanography and climatology.

MET Norway is a state agency serving under the Ministry of Climate and Environment of Norway. The institution is headed by a board, while the day-to-day management is handled by the director.

The Norwegian Meteorological Institute represents Norway in a number of international organizations, including the World Meteorological Organization (WMO), the European Centre for Medium-Range Weather Forecasts (ECMWF), and the European Organisation for the Exploitation of Meteorological Satellites (EUMETSAT); and partners with other international institutions on a number of research and monitoring projects, such as  MyOcean, MyWave, and the North West Shelf Operational Oceanographic System (NOOS).

The Norwegian Meteorological Institute develops and delivers a wide range of services related to collecting, analysing and sharing of data related to meteorology, oceanography and climatology.

Specifically, MET Norway is maintaining the observational network, which consists of automated weather stations, radiosondes and weather radars. The institution is responsible for quality checking and recording the data collected by this network. It also received data on various oceanographic parameters collected by petroleum platforms in Norwegian waters.

The Norwegian Meteorological Institute, in collaboration with the Norwegian Broadcasting Corporation (NRK), maintains Yr, which is a free online service with weather forecasts covering over 7 million locations around the globe. Launched in 2007, Yr provides weather forecasts in English and Norwegian for around 1 million places in Norway and 12 million places worldwide. Free weather data can be downloaded in formats such as XML, JSON and GRIB, as well as Javascript and PHP.

All public datasets with content related to weather, sea and climate, created by MET Norway, are accessible via API MET Norway Weather. The data cover the whole world and include high-quality 10-day weather forecasts as well as other information. The data for the Scandinavian area come from MET Norway, while data for the rest of the world are supplied by the European Center for Medium Range Weather Forecast.