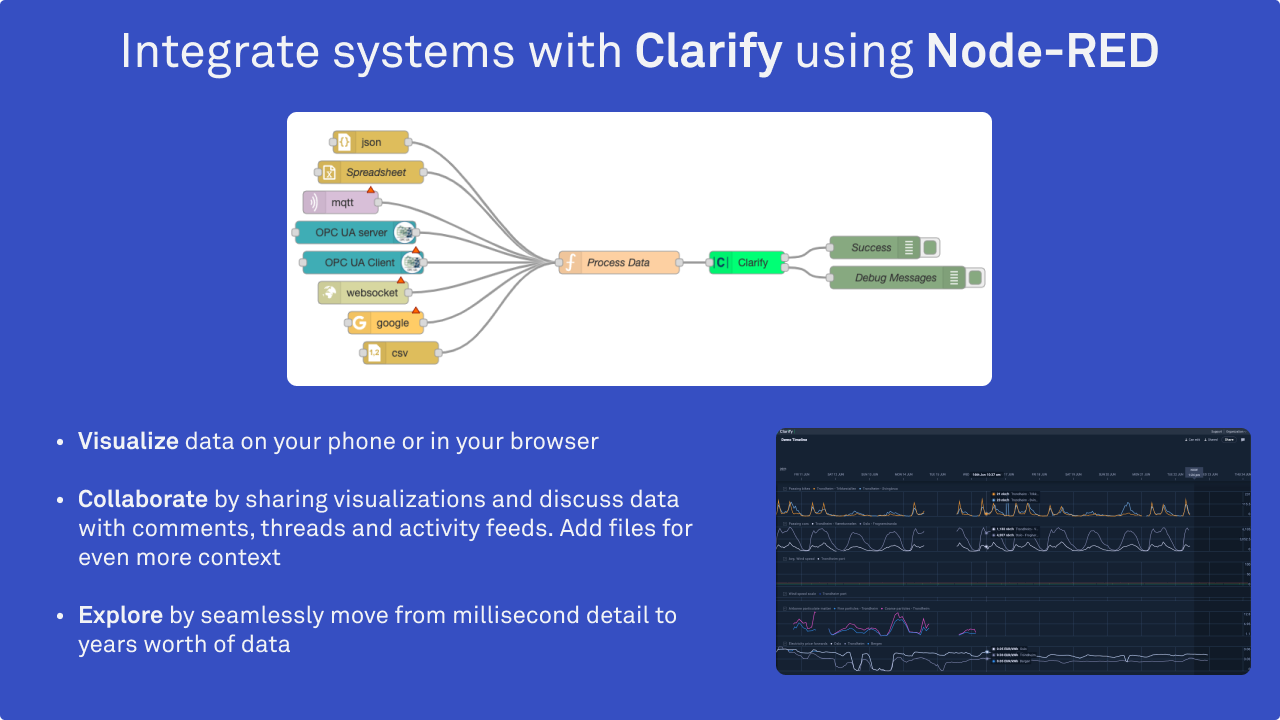 Node-RED is a flow-based programming tool for visual development that enables and simplifies the interconnection of online services, hardware devices, APIs, sensors and other elements within an IoT (Internet of things) system. The main component of Node-RED is browser-based visual editor that makes it easy to connect different components of the system to each other with a wide range of nodes, which then can be instantly deployed to the runtime.

Node-RED data can be imported into Clarify for analytics and collaboration in a variety of ways. As mentioned, there is a large library of community contributed nodes available. We at Clarify made a specialized Node-RED input node for Clarify that lets you utilize the flexibility and productivity provided by the Node-RED runtime and editor. This node makes it easy to integrate with all kinds of systems ranging from hardware and I/O to APIs and web forms.

Additionally, if there are no ready-made plugins for easy connection of your specific equipment, a HTTP or MQTT node can be made to serve these purposes. As long as there is a documented (or reverse-engineered) API available, your data can be imported to Clarify through Node-RED.

Node-RED was originally developed and released by IBM developers Nick O’Leary and Dave Conway-Jones who were a part of IBM’s Emerging Technology Services division. Initially, their goal was to create a tool for visualising and manipulating mappings between MQTT topics, but eventually the project evolved to become a general browser-based tool for wiring together flows of data between nodes.

According to the developers of this tool, the 'Node' part of its name points to both the flow/node programming model and the underlying Node.JS runtime. ‘RED’ part of the name was added mostly as a play on words to make it sound like 'Code Red.' The most popular suggestion explaining this abbreviation is "Rapid Event Developer," but it isn’t official.

The main part of Node-RED is a browser-based flow editor with a wide range of nodes available in the palette that can be used to create JavaScript functions, wiring together flows from various sources in the IoT ecosystem and deploying them to the runtime in one click.

Node-RED’s runtime is built on Node.js, an open-source cross-platform JavaScript runtime environment that executes JavaScript code outside of a web browser, utilizing an event-driven and non-blocking architecture. This makes Node-RED a great software to run in the cloud and on low-cost hardware such as Raspberry Pi.

Created Node-RED flows are stored in JSON format that is commonly used for data sharing purposes across platforms. There is also an online open-source flow library containing various flows created by Node-RED users for various purposes.

Aside from the Node-RED visual tool, there are three other components to this solution, all of which are developed as separate projects. They are Node-RED Dashboard (a dashboard user interface for Node-RED), Node generator (a command line tool to generate Node-RED node modules from a number of sources), and Node-RED Command Line Tool (a command-line tool for remote control over a Node-RED application.